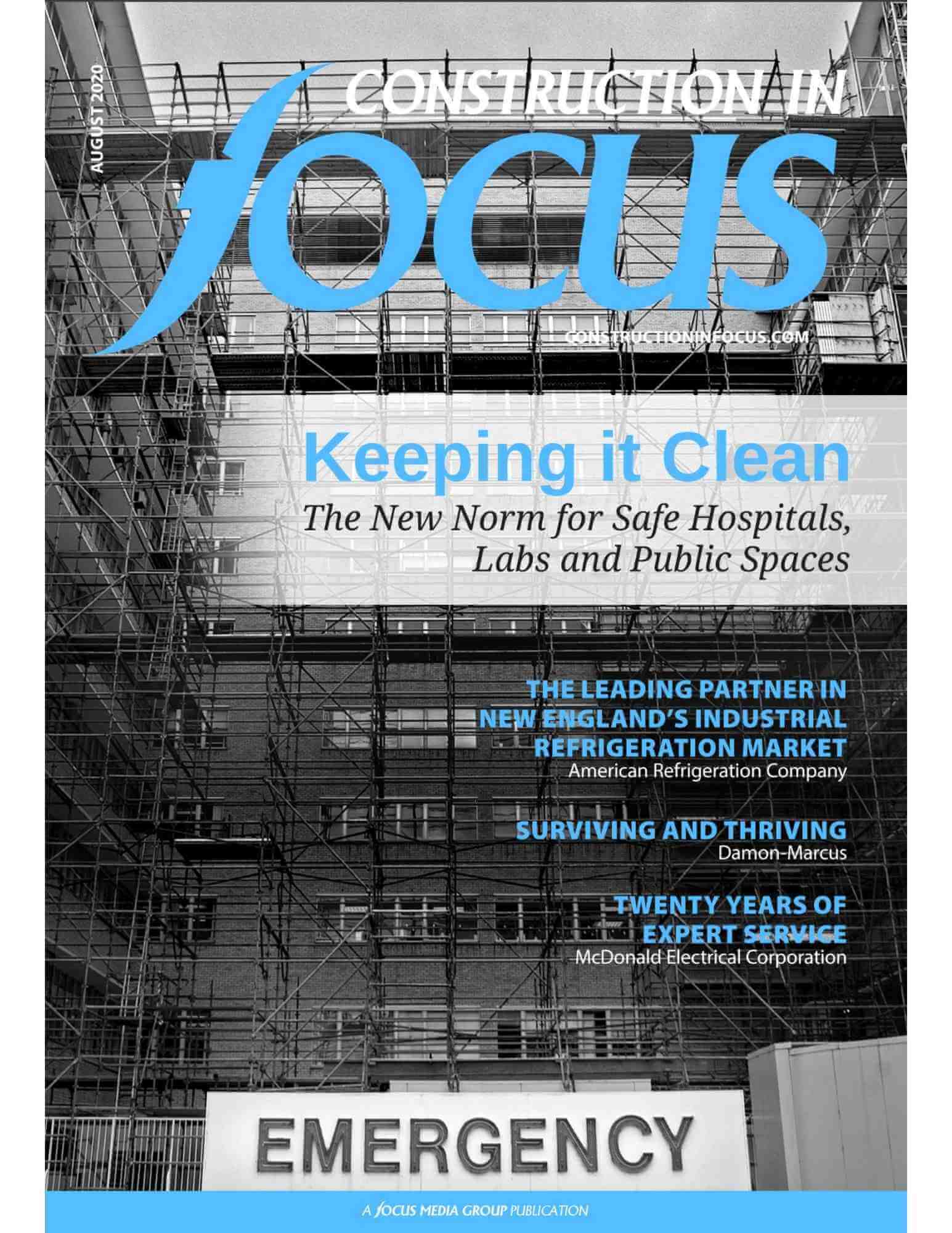 Featured in Construction In Focus Magazine

Founded nearly 150 years ago, The Geiler Company of Cincinnati, Ohio is a woman-owned, family-run business that provides heating, plumbing, and cooling services for residential and commercial clients. Specialties include installing, repairing, and servicing plumbing systems, process piping and refrigeration, pump-related work, and heating, ventilation, and air conditioning (HVAC) systems. The company is weathering the COVID-19 lockdown and looking forward to the future.

Many of The Geiler Company’s services are self-performed by its unionized workforce, although some duties such as testing, adjusting, and balancing are subcontracted out. “We do some of our own ductwork, but we subcontract out quite a bit of it. We don’t have a duct fabrication facility, although we do have a piping fabrication facility. [Piping] insulation, typically we sub that out,” says Vice President Reid Geiler.

Among the sectors served are residential, educational, medical, and manufacturing. Thanks to the geographically advantageous location of its hometown, the company can work in three states. “If you look at a map, Cincinnati is in the southwest corner of Ohio. We’re right across the river from Kentucky, and we’re probably sixteen miles from the Indiana state line,” he says.

While frequently hired as a subcontractor, the firm does not like to fence itself in. “We work with construction managers. We work for general contractors. We work directly for owners. We do design-build work. We’re familiar with all the project delivery systems,” Reid states.

After experiencing strong growth in recent years, The Geiler Company has had to reckon with the onset of COVID-19 and the ensuing economic lockdown. “In the state of Ohio, we were deemed essential services,” he says, so, fortunately, work did not grind to a halt.

Activity on the residential side was not greatly affected, other than homeowners now tending to be at home when company employees perform their tasks. To ensure that staff members do not get sick, frontline employees follow standard precautionary measures and use masks, hand sanitizers, and social distancing.

Some big construction jobs have been halted for the time being. The company was supposed to put in new boilers at Miami University in Oxford, Ohio and was slated to provide plumbing services at a downtown Cincinnati building being transformed into a boutique hotel but those projects have been called off for now.

Due to the unexpected dip in business, The Geiler Company was forced to lay off thirty staff members at the start of the lockdown; however, most of these employees have been hired back. Despite these initial layoffs, the company has been ahead of the curve in terms of receiving information about the virus and lockdown regulations.

“One of my daughters is an attorney for a very large law firm in Cincinnati, and she was in charge of the COVID response for her firm. We were very fortunate in that we were getting updates [from her]. The other thing is, my mother [Dr. Nancy Blades Geiler] is a retired physician, so she understands all of this,” Reid notes.

The Geiler Company relies on its reputation for good work and a strong online presence to attract clients. That reputation goes back to 1885 when it was launched in Cincinnati. “The founder was Charles Geiler. He would be my great-great-uncle. My great-grandfather was his brother, who joined him two years after the company was founded. Eventually, Charles decided to leave the business and gave it to his brother. My grandfather took it over from him then my father took it over,” Reid explains.

Plumbing was the focus at first. This meant more than just fixing leaky water pipes, however. The company also worked on steam and hot water systems, infrastructure that was particularly important in the nineteenth century.

Under the guidance of Reid’s father, Jack, the company was modernized and expanded. Jack Geiler served as an air force flight engineer during the Second World War, and after his discharge, he applied lessons learned in his military service to the family business. Realizing the importance of good communication, for example, Jack installed two-way radios in company vehicles which was a pioneering move at the time. The company branched into new areas, including process piping, refrigeration, and HVAC work. He also expanded its service department.

For his part, Reid says he “grew up with the business.” When he was eight years old, his grandfather paid him a quarter to wash the company’s windows on weekends. He worked at the plant during the summer when he was fourteen, sweeping floors, taking out the garbage, and other menial tasks. A few years later, he worked on job sites with company plumbers. He attended college in Kentucky then earned an MBA at Xavier University in Cincinnati, all the while working at the family firm during the daytime.

Being a family-run business with a tradition of passing on ownership to the next generation “helps us to understand the people who are working for us, and that’s very important,” he says.

He says the plan is to keep the company within the family for the foreseeable future. He ascribes its remarkable longevity to “luck and commitment.” According to Reid, his grandfather decided to remain in Cincinnati when the rest of his family moved to San Diego. By staying behind, his grandfather was well-positioned to purchase the company when the opportunity arose in the 1920s.

Reid’s mother, Dr. Nancy Blades Geiler, has the controlling shares of stock in the company. Thanks to her presence, The Geiler Company is a certified woman-owned business, and having certification as a Women’s Business Enterprise (WBE) “helps somewhat,” in terms of getting contracts “but is not the predominant reason people use us,” says Reid. The main reason is “because we’re competitive and do quality work and people know we’ll be here next week. [We offer] stability.”

It also helps that company has a solid reputation for doing excellent work on projects big and small. Over the decades, it has worked on several prominent landmarks in the Cincinnati area, including Riverfront Stadium and the 580 Building of high-rise apartments.

In-the-field work is complemented by an emphasis

on customer support and round-the-clock emergency services. This union shop has connections with locals representing plumbers, pipefitters, and mechanical equipment service specialists. Having a unionized staff ensures that frontline workers are reliable, reputable, and skilled, and these positive attributes also help bring in business. “We do a lot of renovations because we have a more highly-skilled labor force than a lot of our competitors. A lot of them shy away from that type of work, but we embrace it,” states Reid.

The company also benefits from the safety-mindedness of the unions it works with. “The unions are very strong on safety training. In fact, if you’re a first-year apprentice, the first thing they teach you is safety,” he says. “All of our people have thirty-hour OSHA cards,” referring to Occupational Safety and Health Administration training certificates. Employees undertake additional training on boom lifts, scissor lifts, ladders, forklifts, and other equipment while an outside safety consultant imparts further lessons.

The company currently has “about ninety-five,” employees, he says. “We’ve been as high as two hundred but decided that was not conducive to profitability.”

As for the future, he has a vision for the company of steady sustainable growth as well as personal goals. “My goals are to be able to transfer a lot of my day-to-day responsibilities to someone else. I want to be able to just be more of an advisor… We’re trying to transition to the next generation.”

This transition is the biggest issue facing the firm at present. The company is relying in part on family ties to meet this. In addition to his daughter who works as an attorney, his other daughter is an accountant and he has a son-in-law “who is very interested in the business. So, we’re trying to figure out the best way [to transition].”

At the same time, The Geiler Company also plans to grow by augmenting and enhancing existing services – doing what the company already does, “just doing it better,” he adds.