Why does my dishwasher make a hissing sound when it is off?

Having a dishwasher is one of the modern luxuries we sometimes take for granted. The time-saving appliance is such a convenience when it’s in tip-top shape. But, when something goes wrong, not only do we have to wash dishes by hand, but we occasionally must deal with a big, wet mess. The good news is that if your dishwasher is making a hissing sound when it’s off, it’s usually an easy fix for a pro!

Although a dishwasher should be silent when it’s off, not all dishwasher sounds are bad. In this article, we’ll look at the normal sounds from a dishwasher, and teach you the red flags.

Normal noises from a dishwasher

You can often tell that something is wrong with your car just by noticing an unusual noise. The same is true for a dishwasher! This appliance makes a cacophony of noises while it’s running, but not all the noises are normal. Recognizing what is or isn’t supposed to be happening will help you keep up to date with maintenance needs.

Not all dishwashers are created equal. If you recently moved, or got new appliances for your kitchen, the dishwasher might sound different from what you’re used to. Check out this list of noises to be expected, which will help you separate the good from the bad.

Swishing water A dishwasher works by adding water, heating water, and spraying water inside of the appliance. When you push the button to begin a cycle, the dishwasher starts by filling the shallow basin. The basin has a heating element that warms the water. It adds the detergent, then pumps the water through the jets. This entire process is repeated, minus the detergent, to rinse the dishes. Each of these steps can cause the sound of water spraying or sloshing around.

Gentle thumping Sometimes, something small like a utensil or lid will fall out of its place. If an item slips below the shelf, it can get in the way of the jets. When the jet arms hit the object, it will cause a soft, rhythmic knocking noise. This is not ideal, but nothing to be concerned about. It’s merely a reminder to be more careful when loading the dishes next time.

Clicking Some dishwashers will make a clicking noise as they run through a cycle. This is often caused by a switching device, which is controlled by an electric motor. You may hear this clicking sound when the appliance changes from one stage of the cycle to the next.

Humming There are multiple parts within a dishwasher that can make a humming sound. A dishwasher uses a motor to power the pump that sends the water to the jet arms. Later, that motor powers the pump as it sends water away through the drain hose. That very drain pump can make a humming noise when it’s on, too. There is also a fan that serves to cool the motor that can cause a soft humming sound.

Many modern dishwashers are built with a food disposal. They’re not meant to work like a regular garbage disposal. However, they can handle small bits of leftover food on dishes. The disposal works by grinding up the small particles of food until they’re small enough to exit through the drain. When the disposal is running, you may hear a humming sound.

Snapping A snapping sound is normal and is caused when the detergent lid opens during the cycle.

A pause In order for the drain pump to remove food debris effectively, it starts and stops as it works. You’ll hear what sounds like a pause within the cycle. It may seem like something has quit working, but a pause is normal. 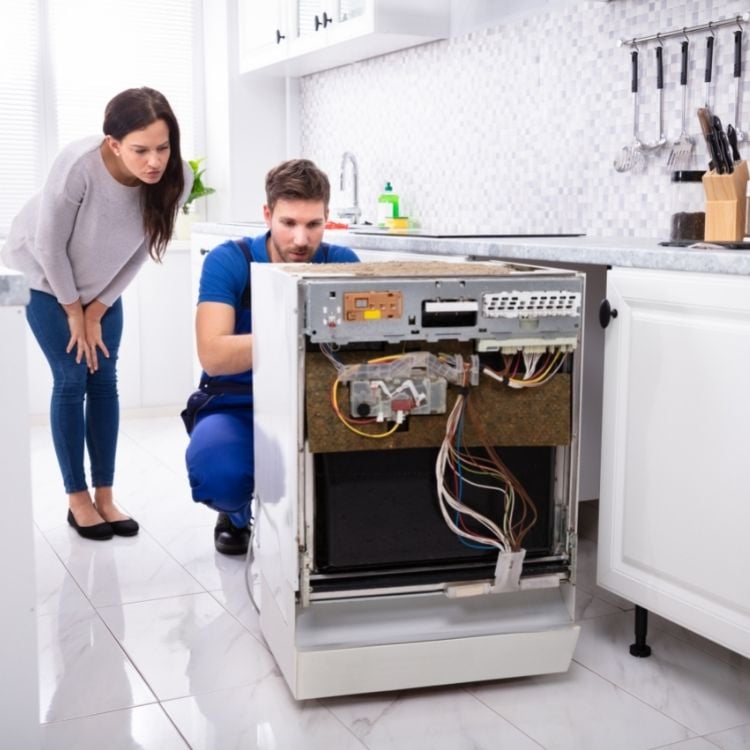 Red-flag noises for a dishwasher

Now that you’re familiar with the normal sounds that happen during a cycle, you can spot audible warning signs. Almost all consistent, abnormal noises in a dishwasher lead to a plumbing issue. One of the common red-flag sounds is a banging that’s caused by a pipe issue called water hammer. If you keep hearing a banging noise in your dishwasher, you should definitely call in a professional.

Another common red-flag sound is a hissing noise when the dishwasher is off. A dishwasher that is hooked up properly and working without problems won’t make any noise in between cycles. But owners that are dealing with a hissing sound can almost certainly bet there’s something up.

What you’re hearing when you notice the hissing noise is the sound of water running when it shouldn’t be. Most modern dishwashers include an anti-flood device. This part does just what you’d imagine. It keeps water from overflowing from out of your dishwasher and onto your floor. The anti-flood device is, therefore, our friend. But some conditions can cause the device to stay on all the time. This, paired with the water pumping through the anti-flood piece, causes the hissing sound.

The question, then, is what is bringing water into the dishwasher when it’s not on? In many cases, the answer is that there’s a leak in the valve or elsewhere. The leak is letting water into the appliance, which is continuously triggering the anti-flood device. There may also be an obstruction in the one-way valve.

Another possibility is that the unit's drain line has been routed incorrectly. When a drain hose is installed the right way, it will allow waste to exit the dishwasher without the chance of any water returning.

The easiest way to tell if one of these issues is causing the hissing sound is to turn off your water supply. If the hissing sound stops, you’ll know that it was being caused by a leak or an issue with the drain line.

At this point, it’s a good idea to call in an expert like Geiler. While you could try the DIY approach, you want to make sure that an incorrect install or a leaky valve gets fixed the right way. With our decades of experience with plumbing in Cincinnati, we’ll be able to quickly identify and address the problem.

Your Dishwasher is Not a Garbage Disposal