What is That Whistling Noise When I Turn My Shower On?

There's something freeing about singing in the shower. Belting out one of your favorite songs into a shampoo bottle-turned microphone? Nothing compares. And while plenty of people have Tried out a show tune or two in the shower, not many expect to hear their shower harmonize with them. If your shower is making a whistling noise, something has gone awry. Not just with your performance, but with your plumbing.

There are several possible causes for a whistling noise from a shower. We’ll cover each one here, and give you tips on how to fix it.

The mechanics of a whistle

Whether or not whistling is your forte, you probably understand the mechanics of a whistle. In order to create this high-pitched sound, moving air needs to be restricted to a small space. The high pressure of air moving through a restricted space creates the whistle.

These same, basic mechanics are also true for the whistling noise caused by a shower. Something within your shower, or the plumbing that leads to it, is causing pressure. If you are DIY savvy, some of these troubleshooting steps might be accessible for you. In other cases, a whistling shower needs the help of a local professional plumber like Geiler 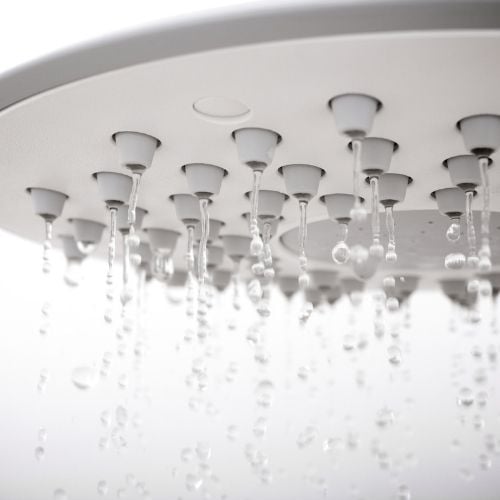 The first place to look for the cause of a whistle is the shower head. Sometimes the fix can be as simple as giving an old shower head a good cleaning.

Start by examining the exterior of your shower head. Look closely at the nozzle and each of the holes. Sometimes minerals from hard water can cause a buildup of deposits over time. This isn't harmful to you, but it can block the holes and prevent water from flowing properly. A shower head with a buildup of deposits like limescale might look coated in white or a light green. If your shower head matches this description, start the troubleshooting by giving it a good DIY clean.

Let the shower head soak overnight. Carefully remove the bag, rinse off the shower head, and give it a test run. If the whistling noise is gone, you're good to go. If not, it's time to move on to the next test.

If this doesn't work, it’s time to get out the adjustable wrench. Hold on to the pipe with one hand and turn the wrench counterclockwise at the base of the showerhead with the other.

Once the shower head is removed, it's time to inspect the shower head pipe. This is just the visible piece of pipe directly attached to the shower head. Look inside of the pipe for a mineral deposit build-up. If you see any sign of this, you can use the same DIY cleaner to remove it.

Mix your solution of white vinegar and baking soda. Turn the pipe arm up carefully and pour in some of the solution. Let the solution sit for several hours or overnight before putting the pipe back in its original position. Turn on the shower and check for whistling.

The restricted water flow in the above scenarios causes a high pressure that creates the squealing sound. Another possibility is that high water pressure in general is creating a whistling noise. It may be that water is being pushed through the shower too quickly.

There are a couple of causes for high water pressure. If you're only noticing increased pressure in your shower, it could be because of a worn-out piece in the shower head that needs replaced. But, if you’ve started noticing higher pressure throughout your home, or are finding that the hot water supply runs out after a couple of minutes, it might be the water pressure regulator. This is a job for a professional.

There are three types of valves found behind the shower wall. If one or more of these is worn out, it may be the cause of a whistling noise.

The handle valves are one possibility. These valves are connected to the shower handles. They are responsible for controlling the amount of hot or cold water that comes out.

In showers with one handle to control both temperatures, there is a shower cartridge. Like the handle valves, the shower cartridge attaches to the single handle, and controls the amount of hot and cold water flowing through the shower.

Remember — a whistling shower isn't just annoying. It's a sign that something is wrong, and that something could get more complicated down the road. Make sure to call a local professional like Geiler to handle the whistling sooner than later.

What is the humming noise coming from my garbage disposal?

What is that hissing sound coming from my toilet?

What causes smelly drains in the bathroom?