Clogged Toilet? How to Fix a Toilet That Won’t Flush

Not sure if it is a DIY or you need a professional?

Text us a Picture or Video

Some common issues in flushing can be pointed to problems with the flapper. The flapper is the rubber cup-shaped object at the bottom of the toilet tank; it’s usually black and easily seen when the toilet tank cover is removed. When the handle of a toilet is pushed down on, it lifts the flapper and allows the water that is in the tank to to enter the toilet bowl. Since the flapper plays such an important role in the toilet bowl receiving water from the tank, any damage or issue to the flapper may result in leakage of water into the toilet bowl. When a flapper is damaged, the best course of action is to replace it. The flapper and lift chain go hand-in-hand and are not too expensive to replace. The best way to do this is to first remove the detached flapper; this is done by turning off the water the water to the toilet and consequently pushing down the handle to remove the water in the tank. Next, unhook the metal arm and the flapper can be removed. 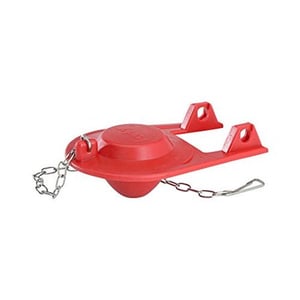 Clogging is also one of the reasons a toilet may not flush properly; it is often the most common reason why a toilet may have weak or no flush. Similar to clogging in sinks or other areas, waste and other matter stuck in the way of flushing might significantly weaken or stop flushing all together. The best method to start unclogging is to start plunging the toilet. Usually trying a few intervals of plunging with flushing will get rid of most minor clogs, but if it the clogging persists, it might be best to seek professional help.

Check out our Plumbing page for more information.

How To Unclog A Toilet

How To Fix A Clogged Toilet